In the CreepUT project the Consortium will further develop the prototype system from the CreepTest project and provide a commercial product for the market. The CreepUT product will be an industrially viable tool for inspection of existing pipework to detect subsurface damage due to creep and be validated for detection of this damage mechanism in its early stages. The Consortium will establish the necessary marketing mechanisms and after-sale infrastructure to support the product and its customers.

Creep is the time-dependent, thermally assisted deformation of a component operating under stress. It is often a key factor not only in the design of components used in the power generation industry, particularly in fossil fuel and nuclear plant, but also in the assessment of their remaining life. Pressurised components such as boiler tubing, headers, and steam piping in fossil-fuel power plants operate at temperatures of 538ºC up to about 570ºC and this is conducive to causing creep damage over the operating life of the component. Although creep in this material has been known about for some time it has only become a pressing issue over the past few years because of two reasons:

Hence the early detection of creep damage in components which are in-service stands to aid in the better management of the power plant and to prevent often catastrophic failures which can lead to severely adverse human, environmental and economic consequences to society. 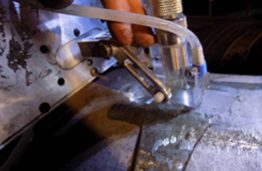